Friday was one of the first formal events of the season for the District Taco/DC Triathlon Elite Team. There was pretty good turnout for an event at Road Runner Sports in Falls Church. Despite thunderstorms in the forecast, and off and on rain all day, we were able to get in a nice 7 mile run along the bike path under only a light drizzle. A nice way to end a full 7 day recovery week, and shake out the legs for a Saturday morning FTP test. 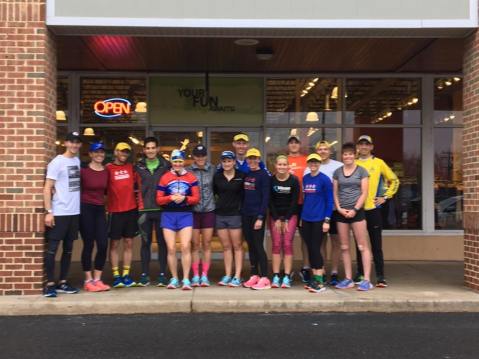 A New Balance shoe rep was at the store and let us test out some shoes. I tried some lightweight neutral trainers that felt pretty good on the run. After returning to Road Runner Sports, the store was nice enough to provide some snacks and a complimentary pair of shoes.

After a bit of hemming and hawing about what new pair of shoes I wanted, I ended up picking up a pair of Saucony Kinvara 8s. It’s a newer model of a pair I’ve liked in the past, so I felt pretty comfortable picking them up without testing them out too much. I’ll probably end up using them in my 70.3 races this season.

In addition to the shoes, we also picked up new SweatVac run gear decked out in District Taco/DC Triathlon Elite Team logos. Now hopefully the weather will cooperate so I can get some use out of the running singlet and visor.